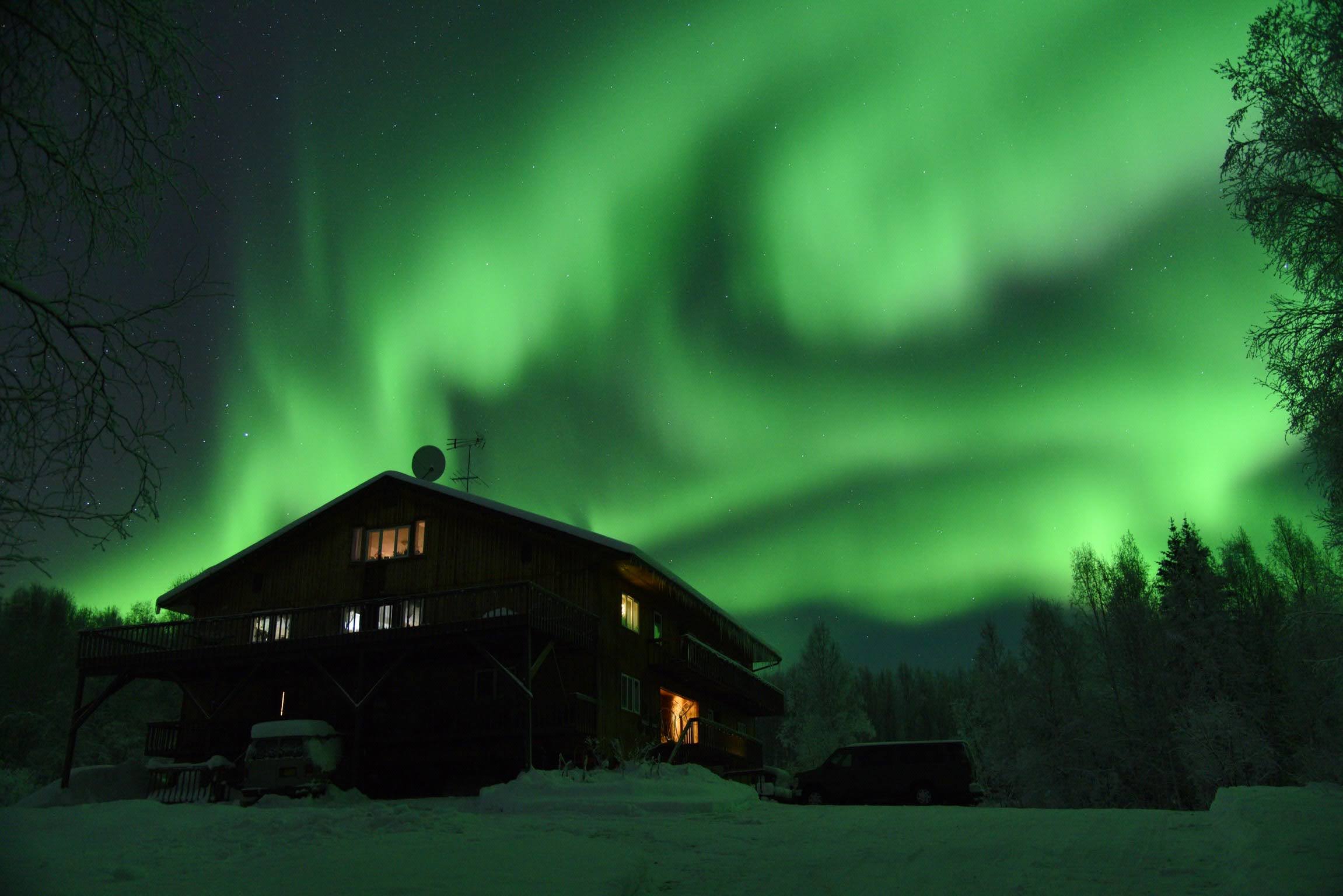 The best time to see the Northern Lights in Alaska is between mid-September and early April. During that time, the nights are long and dark, which makes it easier to see the lights.

In September and October the weather is not cold yet, and while clear skies are not as reliable as in the Spring, the past few years have had incredibly colorful displays. During this time of year bodies of water will not be frozen, so you may have the opportunity to see the aurora overhead and reflected on the surface, which makes for stunning views and incredible photographs! October often brings some snow, but it sometimes doesn’t come until November.

In November and December the cold starts creeping in and snow starts falling. You’ll be able to enjoy classic winter activities like dog sledding and snowshoeing. A higher chance of snow equates to more potential cloud cover, but as the nights get longer you also have more hours for potential sightings.

January through March are the best times to see the Northern Lights in Alaska, although temperatures through February are quite cold, often as low as -20 Fahrenheit, so make sure to wear insulated clothing from top to bottom. If you don’t own everything you need to stay warm in the Arctic (most people don’t!), we offer affordable gear rentals for our tours, which includes suitable mittens, a winter hat, snow boots, and insulated pants and a warm coat.

As March begins, temperatures start rising and since the majority of snow has already fallen for the season, we often have many clear nights. The downside is that with more daylight, you will have to stay up later to watch for the lights.

All of that said, you’ll have a really good chance of seeing the northern lights on any of our tours from September through March. If you want to learn why, scroll down to the last Q&A on the bottom of this page.

Best Time of day To see the Northern Lights in Alaska?

What Time of Night is Best to See the Northern Lights in Alaska? 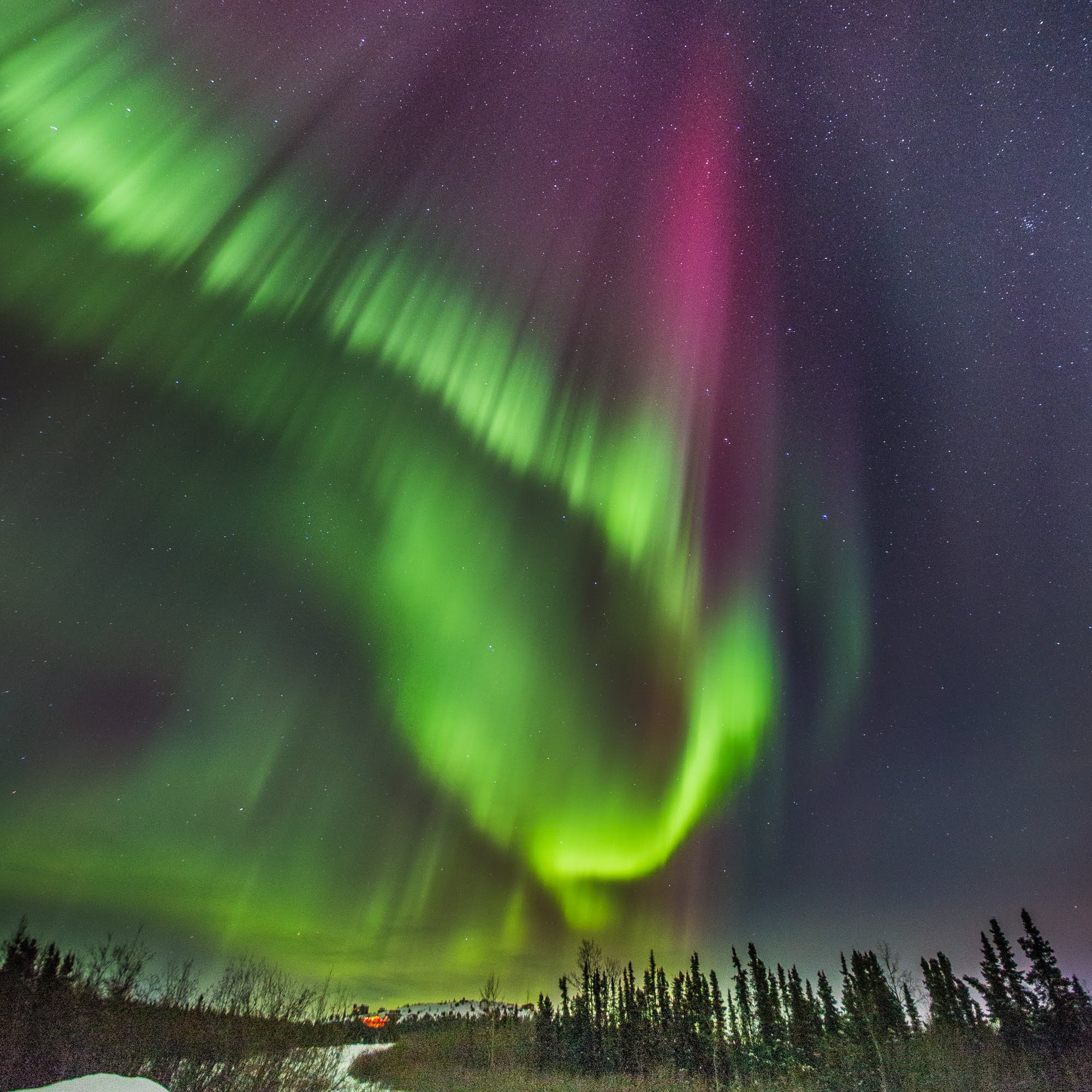 Your best chances of seeing the northern lights is always between 10pm and 2am. Fortunately on our Northern Lights Ecotour, our night-time Aurora guide stays up watching the skies so you don’t have to. We track the solar activity forecasts, scan the skies and provide wake up calls whenever the Aurora Borealis appears.

Where is the Best Place in Alaska to See the Northern Lights? 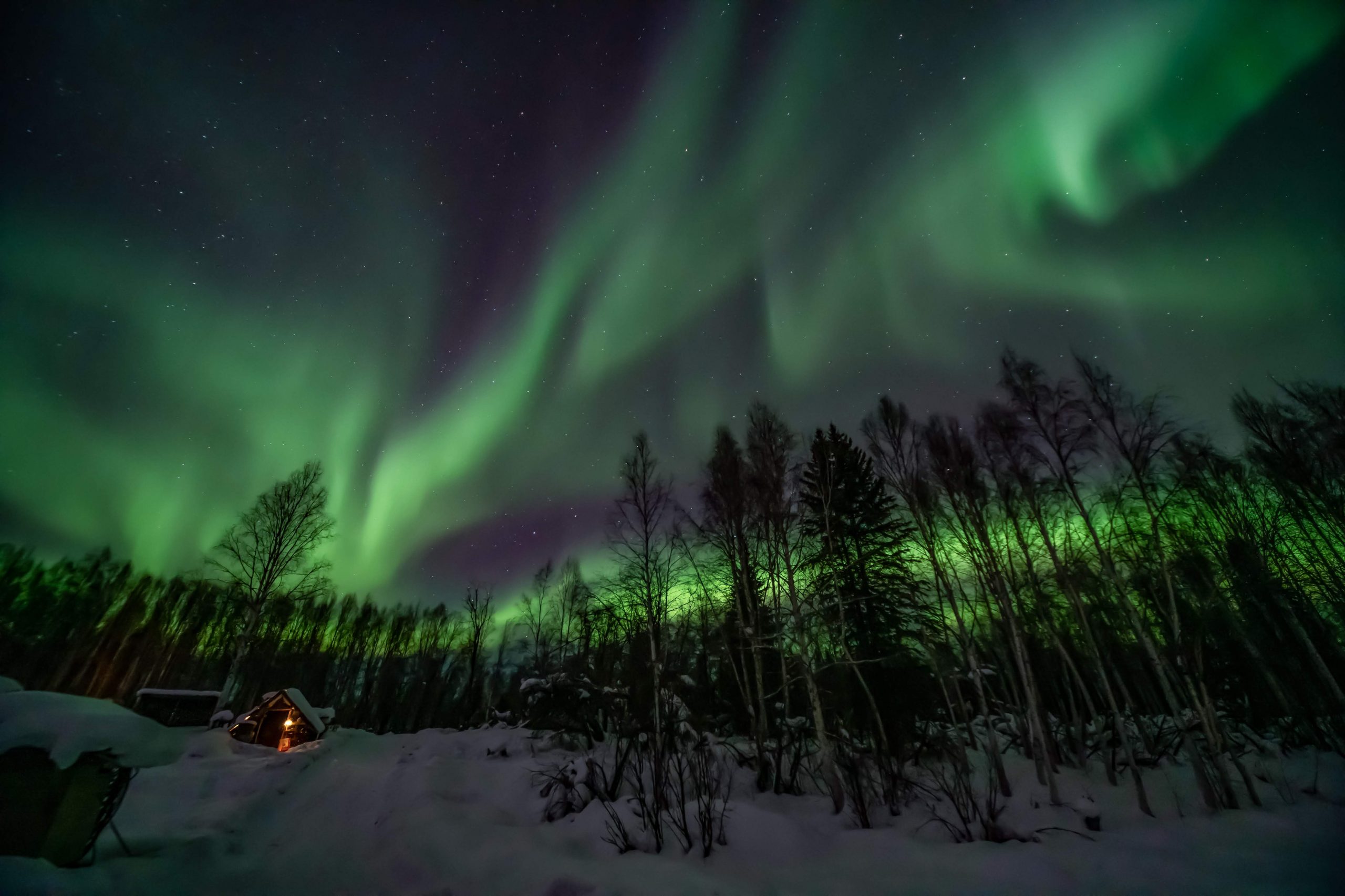 Fairbanks is renowned as the best place to see the Northern Lights in Alaska. The combination of the city’s proximity to the Arctic Circle and its great infrastructure (airports, hotels, restaurants, and so on) has made it a premier destination for seeing the aurora borealis. While visitors and residents can see northern lights frequently right from town, many hotels and tour operators drive people away from the city lights so that they can get a better view of the incredible aurora borealis.

We’ve opted to use a pair of lodges ten miles outside of Fairbanks and away from the city’s light pollution. The location means that the lights appear vibrant in the skies on clear nights and we never have to drive anywhere to see them. Even more convenient is that our aurora guide will wake you up when the lights appear and you can simply roll out of bed, put on some warm clothes, and step outside the lodge to take it all in! They can even help you get photos or get photos of you!

Will I see the Northern Lights on my Tour? 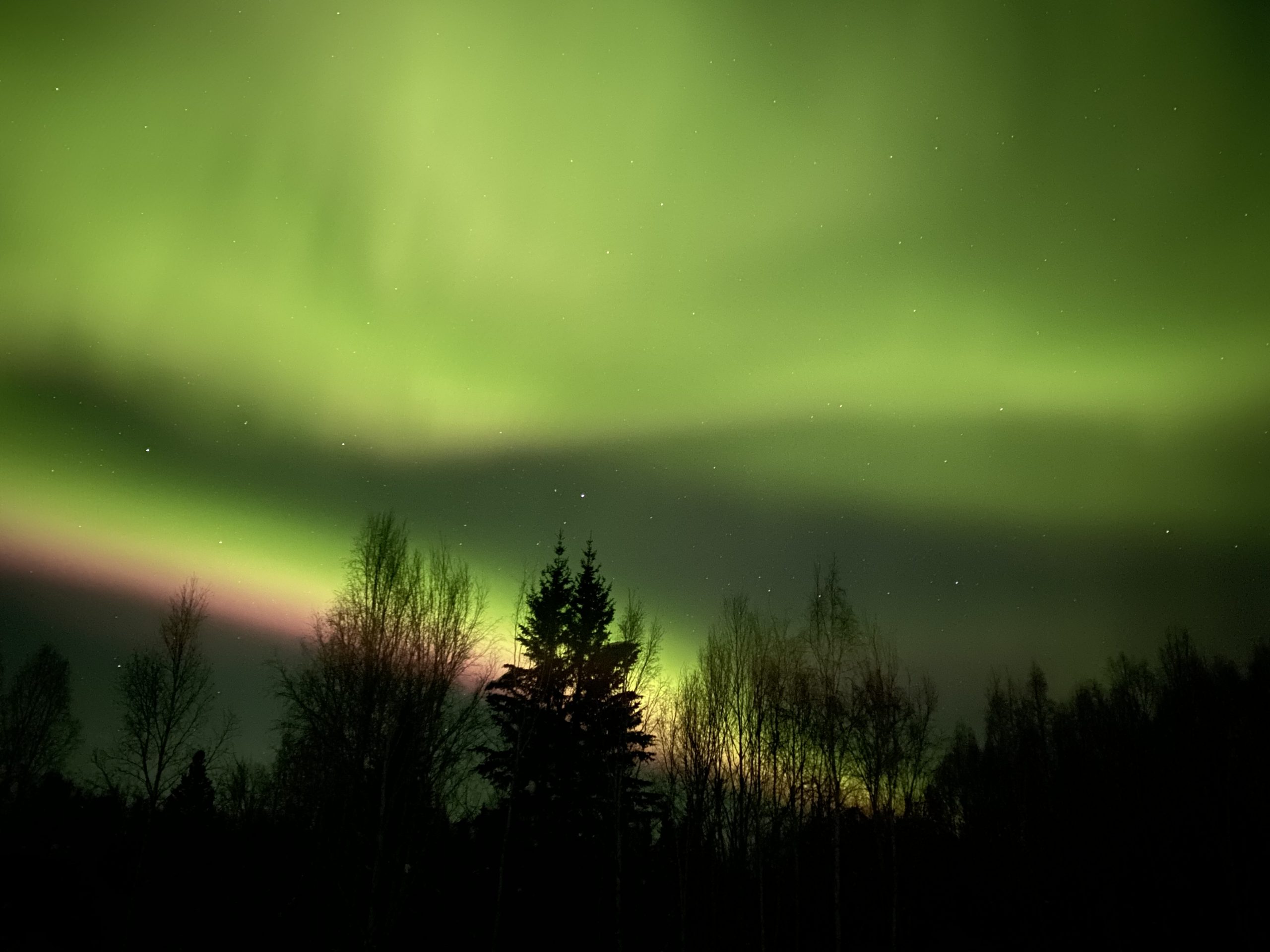 Can You See The Northern Lights In Alaska In September?

We run the tours from September through the end of March/early April. So why are the odds so great? It’s a combination of several factors:

If you’re interested in learning more about our Northern Lights Adventure, which offers one of the best chances to see the northern lights in Alaska — or anywhere for that matter — head on over to our tour page. Submit the form on that page to download the brochure, which includes the full itinerary, upcoming tour dates, and pricing. 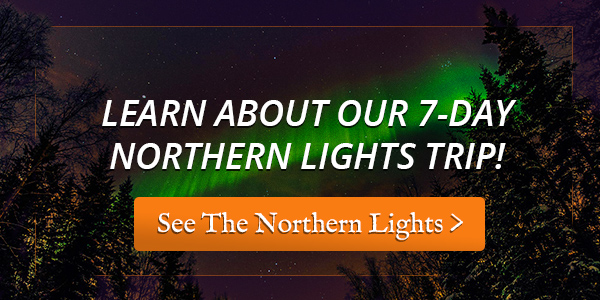 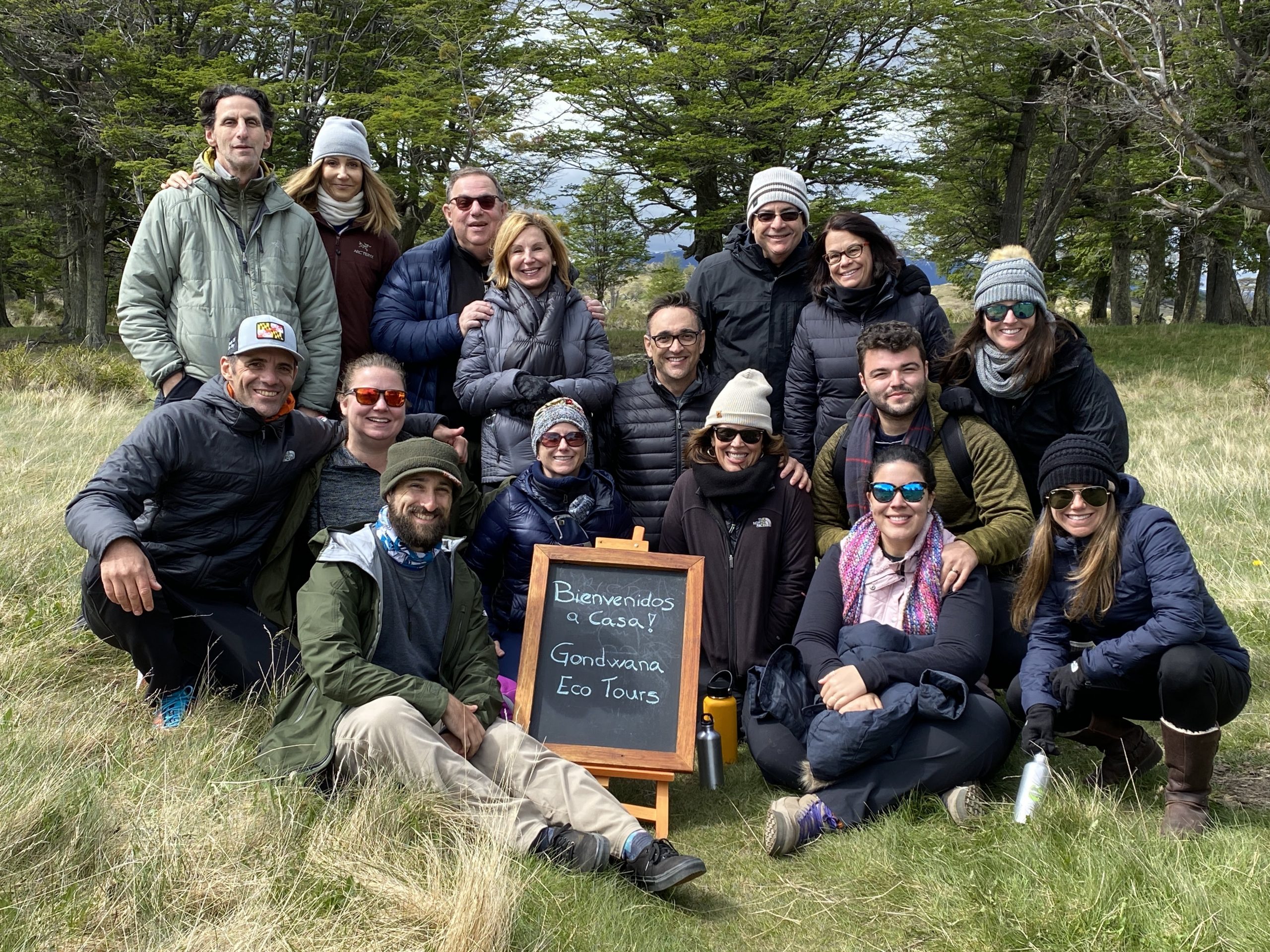